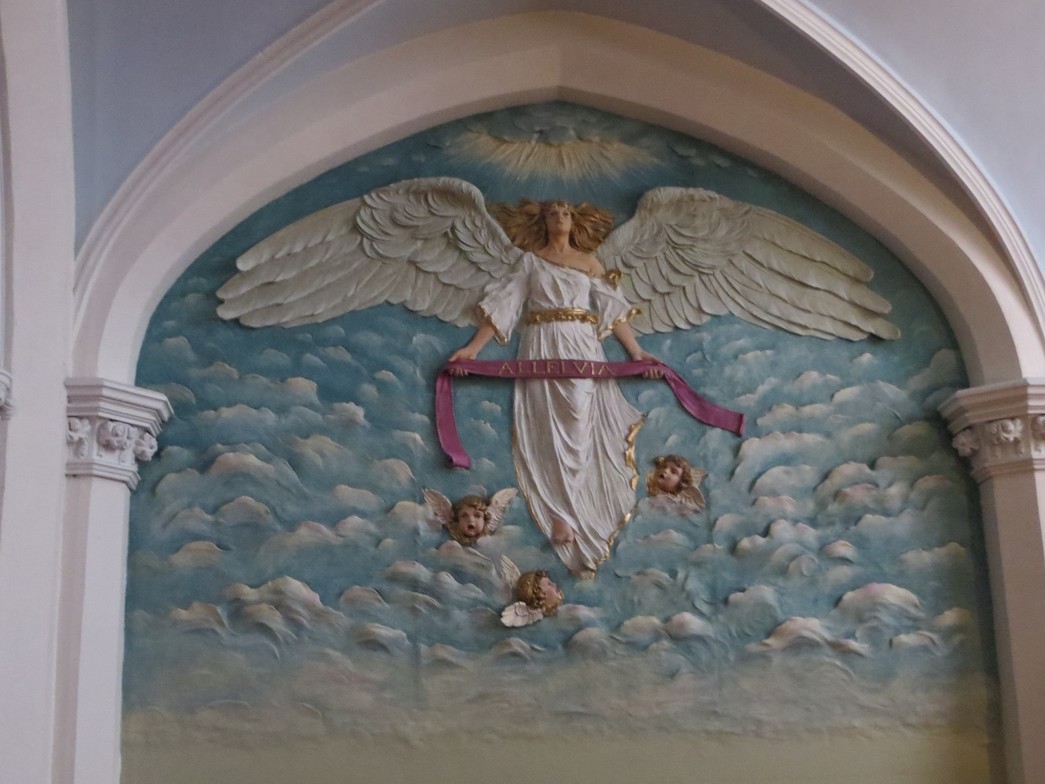 The story of St. Mark’s, the second oldest Anglican church in the Kingston area, begins in the small historically-designated hamlet of Barriefield. Here, in the early 1800s, lived the families of people employed at the Royal Naval Dockyard at Point Frederick (the present site of the Royal Military College).

On April 3, 1843 a meeting of “those desiring the erection of an Episcopal Church in Barriefield” was held in the Pittsburgh Inn. John Marks, Justice of the Peace and warden of the Midland District, and Edward Barker, founder of The British Whig (now the Whig Standard), were elected chairman and secretary, respectively.

By the mid-century the rural parish was well established with a Sunday School, choir and full time priest. In 1862, it had the distinction of being the first church to be consecrated in the newly established Diocese of Ontario.

In 1887, the original box pews were replaced with the present ones, but pew rent continued until 1917.

In 1897, in memory of his recently deceased wife, E.J.B. Pense, publisher of the Daily British Whig and grandson of Edward Barker, replaced the original small sanctuary with a chancel 30 feet (9 m) long and 23 feet (7 m) wide. It had an adjoining vestry room and organ chamber, and was completely furnished with a new altar, reredos, pulpit, prayer desks, and choir stalls, all in dark oak. A magnificent stained glass east window inspired the congregation to install decorative glass in the remaining windows (two already were in stained glass), and to stain in dark oak the wooden interior of nave.

In 1901 an organ was purchased. The only other change to the original fabric occurred in 1960 when another stained glass window as installed, and a new altar, reredos, and sanctuary panelling, all in lightly stained oak, were installed.

The parish acquired a rectory in 1913, when it purchased John Marks’ original house standing opposite the church (it was sold in 1977). In 1961, a church hall was erected beside the church. In 1962, the Province of Ontario placed an historical plaque at St. Mark’s to acknowledge its early English style of architecture with hammer beam roof trusses requiring no supporting columns.

The Royal Military College celebrated its centenary in 1976, and used the occasion to recognize the unique relationship of both St. Mark’s and itself to the Royal Naval Dockyard. The College laid up its Queen’s Colours in exchange for the “Spanish Bell” that had been placed in St. Mark’s tower over 100 years previously. The bell, which has mysterious Spanish origin, had been used in the Dockyard to sound the time in naval fashion. St. Mark’s original bell of 1852 was found in the cellar of the church and re-installed.

In 1993, the parish celebrated its 150th birthday with special events including a Homecoming Weekend, July 10 and 11, with the Primate, Archbishop Michael Peers, as guest of honour. To mark the occasion a parish history was written, its title Courage, Faith and Love taken from the parish motto found on the armorial bearings granted by the Canadian Heraldic Authority, December 28, 1992.

Since its founding, St. Mark’s has been served by 23 incumbents: one incumbent, Canon O.A. Cooke was rector for 38 years, and another Archdeacon C.L.Worrell later became Primate of the Anglican Church of Canada. The laity were not to be outdone – John Sibbitt served as rector’s warden for 51 years! Ladies, too, have been involved with the life of the church from the beginning: raising money at the annual bazaar and tea and sale, doing work in the field of missions and forming the Altar Guild.

For 164 years St. Mark’s has been a centre for Christian witness and worship. Founded in a time of rising population and expectations that lasted a quarter of a century, the parish then settled into a century of stagnation as the rural population on which it was based fell by 50 per cent. Only in the last 35 years has the parish become suburban with an ever increasing population base. As a result the congregation has grown and the future for St Mark’s looks as promising today as it must have for its founders in 1843.

The many treasures such as the litany desk, altar cross and processional cross, that you see in St. Mark’s while visiting, are used frequently in our services and have been given in memory of former faithful members and loved ones.

From the laying of the cornerstone until now there has been an inseparable connection between St. Mark’s and the heritage village of Barriefield. Located on the site of a proposed fortification for the defence of Kingston, St. Mark’s Church is a Provincial historical site, owing to its age and architecture, and is a distinctive landmark clearly visible at a distance from water and land. Close to Fort Henry, the Royal Military College and Canadian Forces Base Kingston, St. Mark’s Anglican Church hosts many visitors every year. People of all ages admire the preserved architecture and enjoy the special charm of the Upper Canada pioneer parish church.

This house of prayer – a monument to our heritage and history – welcomes all who enter. Your prayers are asked for the ministry of this church and for those who worship here.