The Windows of St Mark’s Church 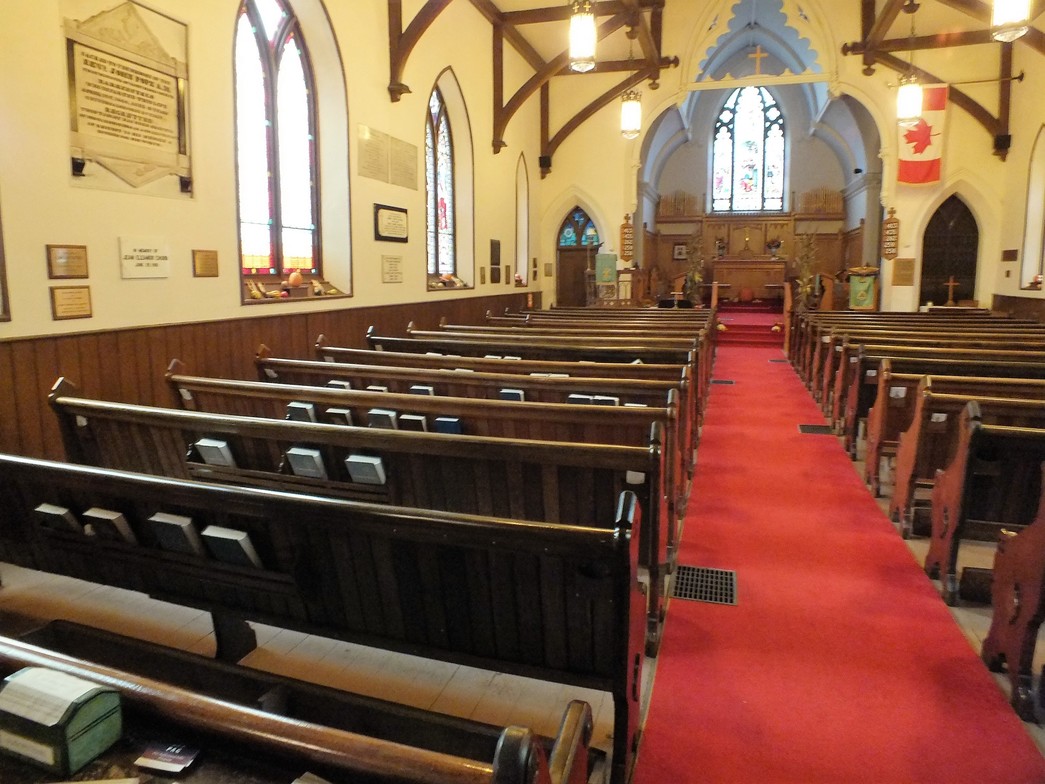 St Mark’s Church is a relatively small building with a footprint of just over 3,000 square feet, smaller than many homes. Yet inside it has a feeling of spaciousness, helped by a nave ceiling height of 24 feet, and by having 20 windows admitting outside light.

The structure consist of the following elements:

1) The Nave. Unchanged since 1844, it is 60 feet long, 30 feet wide, and 24 feet high. It has ten windows: four in the north wall, four in the south wall, and two in the west wall. The two nearest the chancel are similar and smaller than the six identical in size and shape equally distributed three to each of the south and north walls. The two on the west wall are identical in size and shape; both are hidden from the inside of the nave, by one being in the stairway leading to the balcony and the other behind a door to a storeroom. They do, however, give light to the balcony. In detail, the ten windows are:

a) South Wall (next to the Hall), from front to back:

i) A small window that was added in 1897, probably to give more light to the steps leading into the chancel. It has a red and blue glass border around a central portrait of a lamb with a halo carrying a staff holding a banner. Over top is the symbol for Alpha, and underneath the word “Alleluia.” It was restored in 1997.

ii) An original window that was modified to contain the oldest stained glass figures in St Mark’s. Designed by Wales and Strang, it was installed in 1884 following the death of Edward John Barker, one of the founders of St Mark’s. Within a blue and orange border are two figures: one on the left representing St Mark (with below, his heraldic symbol, a lion), and on the right St John (with below, his heraldic symbol, a eagle). On the top is the Star of David and below the following:

Edward John Barker was the founder in 1834 of “The British Whig”, a semi- weekly newspaper that became a daily in 1849, the oldest surviving in Canada, as the Kingston Whig Standard. The window was restored in 1999.

iii) An original window that was replaced by the newest stained glass figures in St Mark’s. Designed by McCausland’s, it was installed in 1960, following the death of Constance Cooke Archbold. The two panels depict Jesus surrounded by children, while he is holding one in his left arm and blessing one with his right hand. On the top is a baptismal font and below the biblical phrase: “Suffer Little Children To Come Unto Me” In a separate panel below is a depiction of St Mark’s Rectory which was bought for Canon Cooke, when he began his ministry at St Mark’s, and where his sister lived until her death. The dedication reads: To The Glory of God and in loving memory of: THE REVEREND CANON ALFRED OLDACRE COOKE, RECTOR OF THIS CHURCH, 1911 - 1950. Born Kingston 1880 - Died 1955, and his sister CONSTANCE COOKE ARCHBOLD, a faithful member of this congregation for many years. Born 1869  - Died 1959. The window was a bequest of Constance Archbold’s will. It was restored in 2001.

iv) An original window modified in 1897. It has a red glass border and is composed of two sections. The upper section of stenciled quarry glass has two symbols in the centre of each panel: on the left is a crown and on the right is alpha/omega. The lower section has a different pattern of stenciled quarry glass with no symbols. Over top there is a flower. The window was restored in 1997.

b) North Wall (looking up Highway 15), from front to back:

i) A small window that was added in 1897 to match the one opposite in the south wall. It has a red and blue border around a central portrait of an open Holy Bible. Over top is the symbol for Omega and underneath the word “Alleluia.” It was restored in 1997.

ii) An original window that was replaced by the figures of St Matthew and St Luke to match the window opposite in the south wall. Designed by N. T. Lyon, it was installed in 1897 by the family of a previous rector from 1884 to 1891, the Rev’d K. L. Jones. Within a floral glass border are the  two saints’ figures: St Matthew is on the left holding a gold coloured pouch and a book; St Luke is on the right holding a book titled St Luke. Below St Matthew is his heraldic symbol, a winged angel, while below St Luke is his heraldic symbol, an angel-winged ox. On top is an angel with the inscription, Have Kept The Faith. Below is: “To The Glory of God and in loving memory of the Rev’d Kearney Leonard Jones, Rector of St Mark’s for 7 years. Died March 1891, aged 49.” It was restored in 1996.

iii) An original window modified in 1897. It has a red glass border and is composed of two sections. The upper section of stenciled quarry glass has a Celtic Cross symbol in the centre of each panel. The lower section of different coloured quarry glass has no symbols. Over top there is a flower. The window was restored in 2001.

iv) An original window modified in 1897. It is identical to the one opposite in the south wall. It was restored in 2001.

i) The two windows are slender and are placed somewhat closer to the north and south walls of the nave than to the tower. The original windows with ordinary glass were replaced in 2002 by leaded pebble-glass inside a red glass border. They were a gift of the window restorer, Mark Thompson, who designed them.

2) The Chancel. It was constructed in 1897 by Edward John Barker Pense, a grandson of Dr Edward Barker, and owner of the British Whig as a memorial to his recently deceased wife. It is 30 feet long by 23 feet wide and has a lower ceiling than the nave. Its floor is in two levels. The choir stalls and the organ chamber are three feet higher than the floor of the nave. The sanctuary is one step higher with the altar one step higher again. The sacristy, which is part of the same structure and the same size as the organ chamber (200 square feet) is on the same level as the floor of the nave.

a) East Wall (opposite to the front entrance):

i) A large window dominating the sanctuary was designed by N.T. Lyon and installed in 1897. It consists of three panels: a large central one flanked by two similar smaller ones. All are elaborate and ornate depicting women illustrating three Biblical quotations. The central one is headed by a depiction of Jesus with his sacred heart exposed. Below is the inscription, “I was thirsty and ye gave me drink.” The scene is a group of ladies giving water to a thirsty man on his knees. Below is a bar with the inscription, “In loving remembrance of,” and at the bottom CORNELIA MARIA PENSE 1849 - 1897 (wife of Edward John Barker Pense). The left hand panel has the inscription, “I was naked and ye clothed me.” It depicts a woman placing a cloak on a naked man kneeling before her. At the bottom, HARRIET GRACE PENSE 1824 - 1892 (E. J. B. Pense’s mother). The right hand panel has the inscription, “I was hungered and ye gave me meat.” It depicts two women giving food to a young child on the ground. At the bottom, MICHAEL LORENZO PENSE 1823 - 1854 (E. J. B. Pense’s father).. The three Biblical quotations are taken from the Gospel of St Matthew, Chapter 25, Verses 35 and 36.

b) The organ chamber is the southern addition to the chancel and was designed to accommodate an organ (previously the church organ had been mounted in the balcony).

i) There are two small windows in the south wall to allow light into the chamber. Both windows were installed in 1897 and consist of pebble-glass. No restoration was required.

c) The sacristy is the northern addition to the chancel and was designed to hold holy elements for use at the altar.

i) There is one double window in the north wall to allow light into the room. The window was installed in 1897 and consists of pebble-glass. No restoration was required.

ii) There is a small window above the doorway leading from the nave into the sacristy. It was installed in 1982 and consists of two main panels and a smaller upper panel. All panels have a stained-glass background of coloured geometric rectangles. The main left panel has superimposed a representation of a communion paten and the main right panel has a representation of a communion chalice. Being inside, the window needed no restoration.  A nearby plaque reads, “The above window was presented to St Mark’s Church to the Glory of God and in memory of EDWARD SPENCE OGLIVIE, 1919 - 1978, former churchwarden and lay delegate by his widow, ELLA L. OGLIVIE and family.

3) The Tower. It is 14 feet square and 55 feet high. It consists of three elements: the narthex (entrance) on same level as the nave has two small windows; the choir room on the same level as the top tier of the balcony has one large window made with two panels; a loft at the level of the ceiling of the nave has one slender window; and a belfry, which has four louvred panels.

a) The narthex has one window in the north side and one in the south side. Both were original windows that were replaced in 2002 by quarry glass windows with a red border, designed by Mark Thompson, AOCA, the window restorer.

b) The choir room has a large window with two panels (similar in appearance to the windows on the sides of the nave. It is an original window facing Main Street that was replaced in 1950 by an amateur-designed window of clear glass with a yellow cross in the centre of each panel. It was not restored.
c) The loft room has one very narrow original window of clear glass. It was not restored.